SPAM mails are sent by someone who is assuming our accounts. 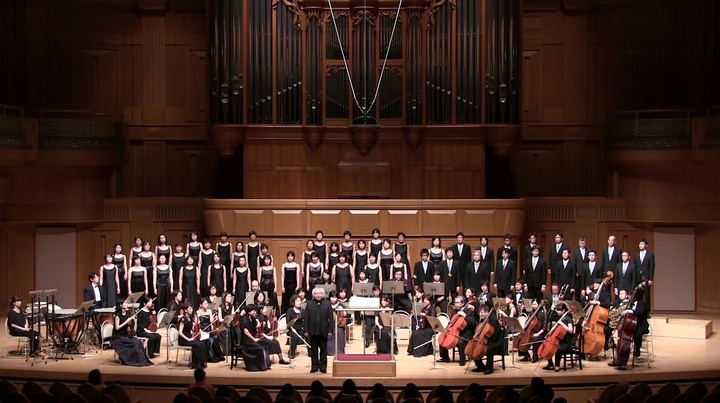 'collegium musicum' is a term for a group of amateur musicians connected with a university. In Germany many 'collegium musicum's flourished in the 17th and 18th centuries, and they took the initiative in giving public concerts. Above all the one that was connected with Leipzig university is famous, and it is a well-known fact that Johann Sebastian Bach actively worked for the group, writing music, conducting them and playing with them.

'Collegium Musicum, Osaka' was founded by TOMA Shuichi in November 1975, being planned to act upon the principles of the former 'colleguim musicum'. Since then we have been giving 'Monthly Concert', with our other activities gradually developed. Now our orchestra and choir give 'Regular Concert' five or six times a year. In addition, we have recently been giving some 'Special concerts', including 'The series of contemporary music' and 'The series of Japanese choral music'. Now we are well-known as one of the busiest groups of musicians in Kansai area of Japan.

TOMA Shuichi, the chairman and conductor, and the choir completed concert tours of Europe in 1989, 1993, 1997 and 1998 to perform in many cities and towns in and around Germany, and each of the performances had a great impact on the audience. In the papers, the music critics highly appreciated their extraordinarily vivid performance with the admirable musicality and precise interpretation of the work.

Having confidence in the results, sine 1991 we have been releasing our CDs, which have been gaining great public favour. Above all 'H.Schütz/ Spiritual choral music (the complete pieces)' and 'H.Schütz/ St John Passion' have been given unstinted praise for the excellent performance.

Recently public interest in comtemporary music has been rising in Japan, so 'The series of contemporary music', planned to be given every spring or summer, has been attracting huge public attention.

'What is Collegium Musicum, Osaka?'

It is the group of musicians, founded by TOMA Shuichi, with the aim of playing, studying and spreading baroque music. What they are striving for most is the perfect performance in which choral music completely harmonises with instrumental music (including organ music).

Our aim is to play music, attaching importance to the origin of the work, considering the way of performance of the composer's day and digging up the actuality the work possesses, so as to strive for marrying society with music and increase music lovers who can cultivate a better understanding of music one another in the true sense.

'Collegium Musicum Chor, Osaka' was founded as one of the few chamber choir in Kansai area of Japan by TOMA Shuichi in 1977. Now the choir includes The chamber choir 'Heinrich Schütz Kammerchor, Osaka', who play an important part of the choir's activity, and 'The vocal ensemble', who are supposed to act as professional singers.

The choir has been introducing lots of choral music in the Renaissance and baroque era, especially H.Schütz's work, which is undoubtedly marvellous but unpopular, under Mr Toma's charge in Kansai. For this reason it is regarded as a choir of distinguished services.

Moreover, the choir has been giving 'The series of contemporary music' since 1990 in order to introduce and spread contemporary choral music, showing its perfectly clear sound and harmony and elaborate ensemble.

In 1989 the choir successfully completed their first concert tour of Germany, followed by the concert tour of Europe in 1993 and other concert tours of Germany in 1997 and 1998, to win the highest praise of critics and newspapers in each city or town they performed in. In 1997 the Schütz Academy in Germany invited the choir to be the first Japanese group to pay an official visit to Schütz's house, which has resulted in their active interchange in future.

The choir was awarded the Prize of Encouragement at the Cultural Festival in Osaka in 1996.

Now it is highly estimated as the choir with the highest technique and Outstanding skill of ensemble, and it is expected to play an active part in choral music not only in Kansai but also in Japan and in foreign countries.

It was founded as a chamber orchestra by TOMA Shuichi, an organist, in 1976. It consists of the graduates of colleges of music and the players who have received professional education of music in Kansai area of Japan.

The main activities are 'Monthly concert (given at Japan Luther's evangelical church, Tennoji, Osaka) and regular concerts given at Izumi Hall, Osaka.

The orchestra and Heinrich Schütz choir, Osaka have played J.S.Bach/ St John Passion, St Matthew Passion, Mass in B minor, Christmas Oratorio, Magnificat D major and many of his cantatas, G.F.Händel/ Israel in Egypt, Messiah, Beethoven/ Symphony No.9, Missa Solemnis, F.Schubert/ Missa No.6 and so forth.

The orchestra alone has played J.S.Bach/ Brandenburg concertos (the complete pieces), Suite for an orchestra No.3, W.A.Mozart/ Symphony No.38,39,41, Beethoven/ Symphony No.4,8, F.Poulenc/ Concerto for an organ, strings and kettledrums, A.Pärto/ Cantus - mourning over B.Britten's death, F.Delius/ Two short pieces for a small orchestra and so forth.

The style of performance including its original point of view with fine sense of the modern world appeals to lots of audience.

Some of the CDs of Collegium Musicum, Osaka